This may appear to be a continuation of the last post about censorship from political correctness, but it actually is not; though it is a continuation of the sadistic Global Elite secretly running our world and how to become aware, or better aware, of what they have in-store for us. Please read with a truly open mind, and don’t just believe whatever I say. Rather, get on the Internet, turn on the TV, or go wherever it is you go to receive news of what is going on in the world of today. Pay very close attention, and remember what you had read here…

So, let’s start off with the mainstream media of today. Mainstream, meaning being owned and controlled by the money-hungry corporations that are owned by major banks—and you know who owns them.

Within the mainstream media, about 90 percent is made up of ignorant people. Ignorant, not in the sense that they are by any means, incompetent. No, in fact many of them are actually well-educated, worldly, and intelligent. I say Ignorant, in the sense of their awareness of the clear connections and context of what’s happening in our world today. Therefore, they see the reports as we are supposed to see them—as a series of unconnected dots happening at random.

As for the other 10 percent, they should have at least some level of awareness that everything isn’t as it seems. But the majority of this meager still choose to ignore what they know and see for their job’s sake, their own protection—and their own sanity. Nevertheless, there are always the ones who support those in the the shadows and play dumb in order to have the mainstream media remain in the dark and stay compliant. They’ll do whatever it takes to hide the massive difference between what’s really happening and what the people are being told.

THE SEEN AND UNSEEN

Once you start paying attention to all that is going on in the world and compare it to history—maybe a little bit of the Bible, too—you can start to make these connections I’m talking about and then you’ll see how these revealed events and people, when put into context, present a common end.

These connections operate multiple levels within the realm of the seen, and between the seen and unseen. Whatever appears to be the reason for something in the seen can have a far deeper meaning in the unseen.

For example, the mainstream explanation for a war will be whatever the dominant force behind the media (like Western politicians and corporations) say it is. They’ll say, “We must invade to stop this dictator from killing his own people.”

But when one becomes aware of these connections with the seen, one can tell this statement has been fabricated as an excuse to remove a target regime as part of a larger strategy in pursuit of global domination and control.

If we venture further into the unseen with the global elite—or what many know as the Illuminati, the Archontic Reptilian force, or Luciferian Satanists, who feed off human fear and other lower vibrational emotions, along with ancient rituals of human sacrifice, torture, child abuse, and their pedophile ways of blackmail—all of which account for the rise in human trafficking—the act of war itself becomes of the utmost importance.

Continued war and conflict are the main priority to what can only be evil personified. No matter who or what or why we are at war, so long as we keep fear, anger, and any negative human emotional response flowing throughout the world, the Elite will continue to thrive. World events can only be understood by knowing whatever is happening in the seen is being orchestrated from the unseen. 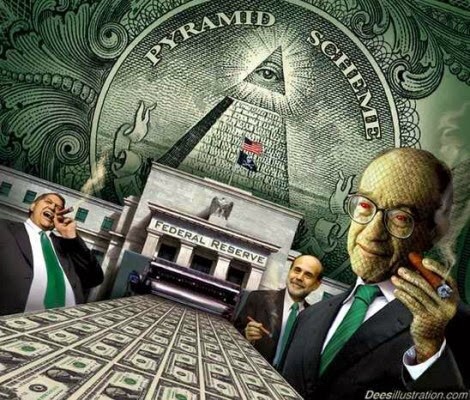 HOW TO BE AWARE

The world of the seen can easily be noticed and understood if three questions are answered: Where are we being taken? And, what are the psychological techniques that take us there? Who benefits from it?

To help find and better understand these answers, one can use what David Icke has termed: “Problem-Reaction-Solution.” With this method, an agenda or goal is desired, so one creates a problem (such as a terrorist threat or attack) watches the people’s reactions (typically always negative followed by looking anywhere for help) and then creates a solution (the initial agenda or goal desired). This also works in a “No Problem-Reaction-Solution,” where a real problem isn’t necessary, only the perception of one is needed.

Along with these two, Icke has another name for the ultimate goal, the “Totalitarian-Tiptoe”—starting with ‘A’ with intent of reaching ‘Z’ with each letter being a step toward the goal (Z). Here, the trick is to make the people believe each stage is happening at random and isn’t connected, thus “tip toes.”

This makes the great perception deception to transform society and the world we live in via censorship, suppression, and marginalization to free thought, speech, and opinion that challenge the official narrative.

There are other mind games to confuse and manipulate the collective perception of events, but these are the two legs that keep the game moving—the global psychiatric program targeting the human psyche.

So, where are we being taken?

If you have seen the movies or have read the book series, The Hunger Games, then this should be as clear as day for you to see.

Our future Brave New World that has been long-planned and being carried-out each day is much like the dystopian world of The Hunger Games. If you have not read this series, nor Aldous Huxley’s Brave New World, then I strongly suggest you do yourself a favor and read a f****** book. But I’ll do you a solid this one time and spell it out for you.

In The Hunger Games Trilogy, the world is a dystopia where the very eccentric and very few, crazy-rich people have created a vicious and merciless police/military state to impose their will upon the poverty-stricken population living in ongoing intergenerational slavery, whose only form of entertainment is watching two kids from their region try to kill all the other regional kids in a televised slaughter of children by means of survival and extreme violence. How this was considered “Young Adult” is beyond me. But if the Elite are foreshadowing or trying to prepare us for catastrophe, this is how you do it.

Besides their form of entertainment, this accurately describes the structure of a global society that is being created right in front of our own eyes each and every day. The plan is for the one percent to control everything with virtually the entire human race enslaved by total dependency for the basics of survival. The police/military control system is coming together across the world being justified to a large part by protecting against terrorism. Terrorism created by the same people who claim our freedom must be deleted to save us from terrorists—the same terrorists they actually control and fund.

As for the second and last question, I believe I’ve already answered this so please feel free to reread this post and let it sink in.

Sleep tight… for the government is always watching.

*From Everything You Need to Know But Have Never Been Told, by David Icke, 2017.